Set Sail This Spring With These 8 Nautical Novels

There’s nothing quite like a good book to quench your thirst for adventure, and what could be more romantic and exciting than seafaring tales of voyage and discovery across the open ocean? These eight novels will transport you straight to the ship’s deck. Close your eyes and you just might hear the crashing waves and feel the salty spray upon your face.

Moby Dick; or The Whale Many people are intimidated by this American classic — our own white whale, so to speak — but there is a reason why this book has stood the test of time. Part adventure tale, part psychological struggle, readers get a glimpse into the psyche of famed Captain Ahab. Surrounded by a truly eclectic cast of characters, you will find yourself questioning your own motivations and desires. And yes, there are hundreds of pages of this book that read like encyclopedia entries of whales and whaling, but just think of all the fun facts about uses for whale fat you can share with dinner party guests. Set directly before the Opium Wars, “Sea of Poppies” is the first book in the Ibis Trilogy and is set along the Ganges River in Calcutta, India. A series of events has thrown together characters from a variety of backgrounds — an ordinary village woman named Deeti, a mixed-race American sailor named Zachary Reid, a bankrupt member of Indian royalty named Neel Rattan Halder, and Benjamin Burnham, an evangelist opium trader. This is sprawling historical fiction that takes readers through the poppy fields along the Ganges, across the high seas and along the exotic backstreets of Canton. This is the swashbuckling pirate adventure story of the kidnapping of Chef Owen Wedgewood by the infamous Mad Hannah Mabbott. She spares his life so long as he provides her a weekly, five-star-worthy meal. The problem is that his divine dishes must be composed in a tiny kitchen in the middle of the ocean. The novel presents every delectable detail of each meal, so don’t read it while hungry. It also explores the charged relationship between the chef and his captor and the conflict between his feelings of loyalty as the ship is constantly attacked and his desire to escape. This novel is probably best known thanks to the 2003 film adaptation starring Russell Crowe and Paul Bettany, which was based not only on this book but on others from the 20-book series. In this first novel of the series, readers are introduced to Jack Aubrey, a young “master and commander” who is promoted to the old and slow HMS Sophie; Stephen Maturin, a poor but skilled doctor who becomes a naval surgeon; and James Dillon, the first lieutenant of the ship. The novel is set in 1800 and the series takes place over the course of the Napoleonic Wars.

Salt to the Sea Ruta Sepetys is one of the best writers of young adult historical fiction out there. This is the story of the little-known, real-life tragedy of the Wilhelm Gustloff, a German military transport ship. The novel follows four characters during World War II who seek the transport to freedom the ship promises its riders. This fast-paced story keeps readers hooked chapter after chapter even if they know the inevitable fate of its characters.

Dead Wake: The Last Crossing of the Lusitania This novel by Erik Larson, who is probably most well known for his bestselling Chicagobased book “The Devil in the White City,” tells the tale of the famous ocean liner as it sets sail from New York to England May 1, 1915, less than a year into World War I. Though the ship was one of the fastest of its time and its captain was certain it would be safe on its journey, history had other plans for the vessel. Whether or not you know the story of the Lusitania’s fate or not, Larson will captivate you with this dramatic, historical tale. 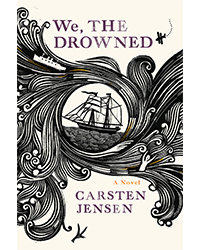 This Scandinavian novel crosses a hundred years, four generations and two world wars. It begins in the mid-1800s with a small crew of Danish sailors who leave their small town to take on the Germans. Many of the sailors do not survive the trip, but one crew member, Laurids Madsen, escapes the fight and embraces anonymity along the high seas. His son Albert begins a journey to find him that takes him around the world. From Russia to Samoa to Tasmania, this epic novel explores the relationship between father and son while also taking readers on a wild, globetrotting ride.

Death on the Nile Agatha Christie’s hero detective Hercule Poirot is probably best known from Christie’s famed train mystery, “Murder on the Orient Express.” But Poirot also solves crimes while aboard the river-steamer SS Karnak as it travels throughout Egypt along the Nile. Poirot meets the rich, beautiful Linnet Doyle and her new husband, Simon, while on vacation. Unfortunately, things take a turn for the newlyweds when Linnet is found murdered. Poirot must sort through a boatload of suspects to find the killer before they strike again. A classic “locked room mystery,” this is a must-read for any Christie or mystery fan.