A Sound Body and Mind: Tips from an Olympian, a Wellness Expert, and a Meditation Guru to Help You Get Centered

Many of us struggle to achieve balance in our daily lives, but finding your center can help you reach your highest potential. Experts from the U.S. Olympic and Paralympic Foundation, includingfour-time Olympian Kara Winger, BIÂN in Chicago, and the San Francisco Zen Center joined a virtual event with Make it Better Group’s Editor at Large, Mimi Towle, to share their advice and personal strategies they use to find their center.

Choose What’s Right for You

Part of finding your center is striking a balance in your life. BIÂN’s Partner and Chief Wellness Officer, Mar Soraparu, suggests focusing on the core practices and fundamentals that positively contribute to your well being.

“What makes you feel physically, emotionally, spiritually, and mentally strong? Identify those practices, and incorporate them into your day,” she said.

One Minute of Intentional Practice Is Enough

Setting aside time for yourself can feel daunting. Soraparu explains the idea of “dosing” or choosing to take small increments of intentional time for practices to help find your center.

“I do my dose of 10 minutes of yoga. Or maybe it’s one minute of meditation, but the point is that I choose for that to be enough. And that’s something I really emphasize,” explains Saraparu. “It’s about making choices with integrity. It’s about watching how you focus on things and what you choose to focus on. It’s how you feel that determines the quality of your life. One minute of anything, if it’s intentional and you’re choosing to make this a very focused minute, whatever it is, it makes a difference.”

A common practice for people to find their center is meditation. However, when many individuals start meditation, they often begin with desired outcomes, such as relaxation. The President of San Francisco Zen Center, Sozan Miglioli, challenges individuals to approach meditation without expectation.

Miglioli explains that desires in meditation are acceptable, but focusing solely on the outcomes of meditation makes the practice challenging. “I see many people coming to the Zen Center… saying, ‘I’m here to get relaxed or fulfilled and balanced.’ And then they start meditating, and you see how they’re struggling,” says Miglioli. “High expectations of a specific outcome will probably lead to disappointment when they do not arise or manifest immediately or if they don’t manifest at all.”

Instead of entering with expectations, Miglioli advises entering meditation with curiosity. Relieving yourself of expectations allows you to be present and reap more of the benefits meditation offers.

“When you sit in meditation or lie down or whatever kind of meditation you’re doing, you enter meditation with a curious, beginner’s mind. Be present in the moment, and don’t invite judgment into meditation. If you can meditate without expectations, it really changes the way you meditate.”

Surround Yourself with Supportive Peers

Throughout her career, four-time Olympian Kara Winger relied on teammates and peers to help her find her center and drive her performance.

When Winger got to the NCAA stage in 2008 and 2009 in the javelin, she was ranked first but never won. She put so much pressure on herself that she couldn’t perform at her best. After those two NCAA championships, Winger focused on the people who supported her and reconnected with her center. She won the Olympic trials two weeks later and made the Beijing team. She then went on to win the USA National Championship in 2009 and made her first All-Championship team. “Honing in on who I represent, who’s on my team, who is absolutely going to have my back no matter what instead of representing the United States has always been what helps me find my center in competition,” says Winger.

Remain Vulnerable and Ask for Help

Winger tore her ACL at the Olympic trials in 2012. No one in the United States on the women’s side had the Olympic standard to take her place in London, so Winger had to compete. She was terrified to compete on her injury, but she allowed herself to be vulnerable and seek guidance. She reached out to her former Beijing teammate Breaux Greer, who tore his ACL in 2004 in qualifying in Athens and competed in the final two days later.

Winger’s reality had not been as bad as Greer’s, but she needed to reach out and connect with a person to find strength and her center. Greer wrote back with encouraging words for Winger. “He said, ‘Do your best. You can do this. I know that you can. I’ve seen you throw for years, and you’re going to be okay.’ So, London, even though it was a dream turned into a nightmare, is still one of the proudest performances that I’ve ever had.”

Winger’s story shows the importance of staying centered and focusing on an elite athlete’s mental, emotional, and spiritual wellbeing. The mission of the U.S. Olympic and Paralympic Foundation is to empower team USA athletes to achieve competitive excellence both on and off the field. The foundation does not receive federal funding and relies heavily on the support of donors to support athletes.

“There are plenty of ways to support our mission as it relates to sound body and mind,” shares U.S. Olympic and Paralympic Foundation President Christine Walshe. “We always think about the weight training and the extreme athleticism required, but the amount of energy in the space of mindfulness and wellness is critical to them competing.” For those interested in supporting U.S. Olympians, you can donate to support Team USA. 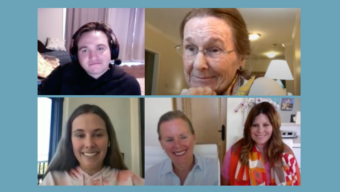 South America, Evolutionary History, and the World of a Little-Known, Intriguingly Intelligent Bird of Prey: Johnathan Meiburg’s “A Most Remarkable Creature”