5 Books to Read This Winter

Now that the nonstop activity and accompanying stress of the holiday season have passed, it’s time to slow down and do something for yourself. If the weather outside is frightful (and it usually is this time of year), just light a candle, brew a cup of tea, and reach for a great book. The Book Stall, one of Winnetka’s most beloved small businesses, shares a winter reading list worth cozying up to.

The World of Tomorrow This book is so wise and so ambitious in scope, with characters so complex, sympathetic, and real, that you will be hard-pressed to set it aside at a reasonable hour. Mathews succeeds at rendering the physicality of New York City just before World War II, the complexities of the Irish-American experience, and the first awful rumblings of the Holocaust. Combine this with all the details of class, race, family, tragedy, comedy, heroics, and jazz, and you have a truly immersive reading experience. Reminiscent of John Irving, “The Heart’s Invisible Furies” is a carnival ride of a novel. Moving through comedy and tragedy with equal force, Boyne tells the story of Cyril Avery, and in the process she tells the story of the 20th century. Smart, sad, and funny. Two whodunits in one! A mystery writer submits the final installment of his series with the final chapter missing and dies two days later. It’s up to his editor to solve two murders — the one in the manuscript, and that of its author — and the plot that follows makes for a smart (and fun!) British page turner.

A Legacy of Spies 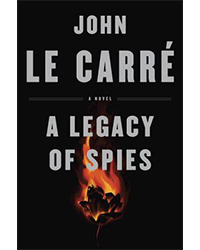 The Cold War is over, but the echoes of that earlier time have come into the present, and an old spymaster is called to account. Once again, John le Carré shows that he is the master of the spy thriller. If curiosity kills the cat, then Leonardo da Vinci would have died young. More than just a passionate observer of the world around him, he sought the underlying reasons for the way things were and the way things worked. In Isaacson’s hands, da Vinci comes alive and sweeps us along as his discovery and analysis become invention and art.