One of the 58th Chicago International Film Festival’s centerpiece tributes brought a beloved hometown hero back to the Windy City. Emmy-nominated actress and Northwestern University graduate Kathryn Hahn, who stars in the upcoming Netflix Film “Glass Onion: A Knives Out Mystery,” was honored with a Career Achievement Award on Oct. 18 ahead of a screening of the new film.

‘Glass Onion: A Knives Out Mystery’

Hahn calls filming “Glass Onion” and being a part of the talented ensemble “a delight.”

“I love every single one of these humans so deeply,” she said in an interview with Better on the festival red carpet. “It really was one of those experiences that I’ll never forget — that it translated to the screen as fun and fizzy as it does is chef’s kiss.”

“It’s because of Rian Johnson and his amazing screenplay and it’s because of Daniel Craig and his incredible generosity as being a part of the ensemble — he’s such a team player.”

But while Hahn was quick to compliment Johnson and her talented co-stars at every opportunity, it was clear that in the minds of the audience of adoring fans who began queuing in the early afternoon and packed Chicago’s historic Music Box Theatre for the screening and award presentation, this night was all about Hahn.

Hahn was honored with the festival’s Career Achievement Award, recognizing a prolific body of work spanning TV and film that includes films from “How to Lose a Guy in 10 Days” (2003), “Anchorman: The Legend of Ron Burgundy” (2004) and “Step Brothers” (2008), to the more recent “Private Life,” “Bad Moms” and “Captain Fantastic.” Recent TV credits include Apple’s “The Shrink Next Door,” HBO’s “Mrs. Fletcher” and Disney+’s “WandaVision,” which earned Hahn a nomination for a Primetime Emmy Award for Outstanding Supporting Actress in a Limited Series or Movie.

Born in Westchester, Ill. and raised in Cleveland, Hahn credits Chicago with playing a huge part in her career path.

“I always knew from the very beginning … I was going to be an actor, but this was the city to tell me you are,” she said. She reminisced about her time as a student at Northwestern University in Evanston — “It was like the Oxford of my dreams. That library, I still dream about that library” — and even shared food memories — “This is the city where I had my first real burrito.”

But it was Chicago’s rich theater culture that played the most significant role in shaping her path, she shared.

“Taking the EL into the city — it blew my mind —the theater, the theater, the theater! … Most of my favorite actors come from Chicago and I just know them immediately — these hardworking, professional hang-up-your-costumes … ensemble-driven, egos checked, prepared and ready to explore, and writing is the thing,” she said.

Hahn called accepting the award and introducing “Glass Onion” in Chicago a full-circle moment for her, given the film’s ensemble cast and her Chicago past.

“This movie that you are about to see is that,” she said. “It’s everything. It’s Rian Johnson. It’s why it’s so crazy I’m here with this particular movie — because it feels so full circle to me of those roots. It’s ensemble … There was no movie star crap … We sang, we danced we hung out together and we just softened as a group … we were just there for each other…”

What’s Next for Hahn

Hahn is currently in production on Hulu’s limited series “Tiny Beautiful Things,” based on the eponymous best-selling novel by Cheryl Strayed, and will soon begin production on “Agatha: Coven of Chaos,” coming to Disney+ in 2023.

A spinoff of Disney+ Marvel series “WandaVision,” “Agatha: Coven of Chaos” stars Hahn as fan-favorite “WandaVision” character Agatha Harkness. We asked Hahn to tell us more about the eagerly awaited series and she even gave us some inside scoop on when filming is set to begin.

“It’s nothing i could have ever dreamed of — to be asked to play a centuries-old witch that no one had ever heard of and then all of a sudden cut to a spinoff show,” Hahn said.

“It’s very very exciting. We’re in the middle of getting the coven ready and it’s gonna be very delicious. I’m very excited for everybody to see that. We start shooting in about a month.”

The Chicago International Film Festival and various programs flourish under the auspices of Cinema/Chicago — a non-profit cultural and educational organization dedicated to bridging the gap between people of diverse cultures and access to the art of film. This year, Make It Better Media Group is pleased to extend one of its annual matching grants to Cinema/Chicago — meaning that for every dollar they raise, MIBMG will match it up to $10,000. From October 5 – 30, consider making a tax-deductible donation to the efforts of Cinema/Chicago and help MIBMG double their impact across the city. 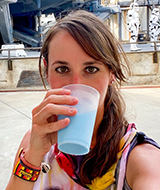 How Much Harm Did the Pandemic Do to Our Kids — and What We Can Do About It? ‘The Stolen Year’ Author Anya Kamenetz Answers Our Questions You Said It: Your Skin Care Won’t Save You — Self-Care Is Important, But What We Really Need Are Communities of Care