Chicago’s Navy Pier is one of the city’s top cultural destinations, so it hosts many different kinds of people with many different tastes. To satisfy those tastes, the Pier has food-to-go, food to enjoy in a casual atmosphere, and food that’s best appreciated in more refined surroundings. Here are nine of our favorites that are not to be missed.

Moving Your Feasts: Food on the Go

Unless you’re going to the Pier to attend a play at the magnificent Chicago Shakespeare Theater, you probably plan to walk around, feel the cool lake breezes, enjoy the panoramic vistas of Chicago … and eat. Definitely eat. Here are some options for those who come to the Pier intending to get something quick and then keep moving while they nosh.

Goddess and the Baker

“Dessert all Day” is the inviting mantra of this higher-quality spot for baked goods, including scones, seasonal breads and the divine Goddess Granola Bars. Breakfast, lunch and dinner are available, as are wine and beer. Craft coffees can be prepared pour-over, drip, French press or Nitro Cold Brew (infused with nitrogen for extra creaminess — without dairy!).

The hot dog is quintessential American street food. In Chicago, there’s a lot of hometown pride riding on this simple sausage dressed with mustard, relish, onion, tomato, sport peppers, pickle and celery salt. Have your American Dog Chicago-style or in about 10 other ways (this wiener is nothing if not versatile). This casual stand has been made famous on the Food Network, Travel Channel, NBC Nightly News, ABC and CBS.

Frankie’s by the Slice

As the name implies, this is a grab-and-go place where you can scarf a slice while moving on — or down a whole personal pizza (you may want to sit to eat that). Also offering hot sandwiches and frozen lemonade (a Chicago standby), Frankie’s spin on the classic Neapolitan crust is worthy, and Frankie’s pizza proves that eating something other than deep dish will not get you run out of town.

You’ll Want to Sit Down for This: Casual Restaurants

If you walk to the end of the Pier and back, your Fitbit will tell you you’ve gone more than a mile. You don’t have to keep moving, of course, and at some point you may want to sit down (read: collapse). Many of the sit-down restaurants at the Pier are suitable for casual meals, some with table service; here are a few of the best. “Elevated pub food” is what they serve at this outpost of one of Chicago’s most popular sports and steak bars, with a massive collection of sports memorabilia and a family-friendly menu. When the weather’s nice, you can sit on the patio, and although this is a restaurant and not a stand, you’ll be comfortable whether you’re in a suit or shorts. Holy cow! (Do make sure you exclaim that Harry Caray-ism at least once in this restaurant.)

It’s all about the bird at Big City Chicken, where they prepare it for you by the piece or in a sandwich. Operated by Chicago’s Lettuce Entertain You team, this unpretentious chicken joint has been hailed by the Chicago Tribune as one of the best restaurants on the Pier and one of the best chicken places in the city. It’s only available fried, but hey, you’re probably on vacation, right? Live a little.

Though the menu at this location has expanded significantly beyond the cheeseburger-and-Pepsi-only combo made legend on Saturday Night Live, let’s face it: You’re probably going to order the cheeseburger. (See if you can avoid saying “Cheezeborger, cheezeborger.” You can’t!) This sprawling outpost of the original retains a touch of the gruff Chicago attitude made legendary at the much tinier first location, founded in 1934.

Though the Pier is definitely geared to visitors coming to Chicago to relax, there are several places designed for finer dining. No jacket required, of course, but expect a higher level of service, perhaps more thoughtful preparations … and even silverware (!). Nominated for five consecutive years as James Beard Best Chef/Midwest, Michael Kornick runs a number of restaurants around Chicagoland. Kornick brings to the Pier “eclectic gourmet burgers” that showcase the chef’s fine-dining creativity as well as a more seafood-centric selection. French fries are some of the best around, and the shakes, if you like, can go “boozy.” 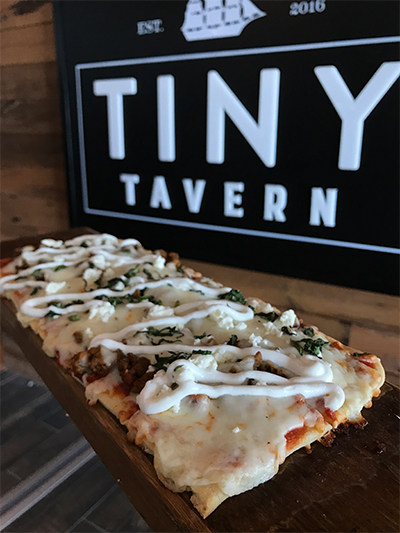 The Pier’s only crafted cocktail destination, Tiny Tavern also has a full menu of bites and sandwiches, as well as braised short ribs and mushroom risotto. Low lights and comfortable banquettes make this the place to go to have a few drinks and get away from the madding crowds.

With expansive windows allowing dramatic views of Lake Michigan, Riva is a sophisticated place to stop for seafood as well as meat-centric dishes. Chef Luigi Garcia is schooled in traditional techniques while keeping up with culinary trends and innovations. And if you come to the Pier to catch a Shakespeare play, there are prix fixe and other pre-play specials. David Hammond is dining and drinking editor at Newcity and contributes to Chicago Tribune and other publications. In 2004, he co-founded LTHForum.com, the 15,000-member food-chat site; for several years he wrote weekly “Food Detective” columns in Chicago Sun-Times; and he writes weekly food columns for Wednesday Journal. He has written extensively about the culinary traditions of Mexico and Southeast Asia and contributed several chapters to “Street Food around the World.”