20 Recipes for Your Next Halloween Movie Marathon

Snacks so good they should have been written into the scripts. Whether you’re throwing a spooky soiree or just need some scary movie comfort food, we’ve got you covered. These munchies pay homage to our favorite flicks, characters, and scenes from all the classics. Happy Halloween!

What’s scarier than being stuck in reportedly haunted woods with an evil witch-spirit in rural Maryland? Being stuck in the woods without snacks. These s’mores bars take your campfire favorite to the next level. But beware, they’ve been known to magically disappear. Get the recipe from Taste of Home.

How to Make Friends with an Alien 101: leave a trail of Reese’s Pieces outside of your house. That was the takeaway from “E.T.,” right? Honor a friendship that crossed galaxies with another classic pairing: chocolate and peanut butter. Get the recipe from Chocolate With Grace. I thought we learned our lesson not to mess with Winifred Sanderson’s spellbook… Just whatever you do, don’t invite your virgin friend over and then light a Black Flame Candle on All Hallow’s Eve, OK? The only magic we want happening is these fudgy brownies. Get the recipe from Half Baked Harvest.

Tequila … magic … pretty much the same thing. Don’t we all wish we could be dancing around the kitchen with Sally, Gilly, and the Aunts making midnight margaritas? Although warning, there might be a pretty bewitching hangover. Get the recipe from Verbena Apothecary.

Layers of flakey, buttery pastry atop warm, baked brie … not a snack you want to keep under wraps. The brie takes just a few ingredients and is ready in under an hour, leaving plenty of time to catch all the mummy action your heart desires. The only question — Tom Cruise or Brendan Fraser? Get the recipe from Delish.

Despite its name, this creamy, sweet, butterscotch-flavored drink is actually non-alcoholic. But, if all the Quidditch is bringing out your competitive side, you can try one of these “Harry Potter” drinking games. Get the recipe from The Food Hacker.

At least your prom wasn’t this bad. And if it was, have another Bloody Mary. Get the recipe from The Spruce Eats.

Let’s get back to the basics — vampires who don’t “sparkle” or integrate into American high schools as eternally gorgeous 17 year olds. We want Transylvania-based bloodsuckers and stakes through the heart. Oh, and cookie sandwiches. Get the recipe from Delish.

“The Nightmare Before Christmas” (1993) — Spiked and Spicy Hot Chocolate

Slow down, it’s not Christmas yet. But, you can get into the yuletide spirit a little early with a spiked hot chocolate as you watch Jack Skellington journey to Christmas Town. The wacky world of Tim Burton can transform any night into Halloween. Get the recipe from Best Decanter Sets.

Revel in childhood nostalgia while sipping on a delightfully adult drink. Although, after a few too many of these you might start seeing the Great Pumpkin, just like poor Linus. Get the recipe from Domesticate Me.

Find yourself a ghost who makes you pancakes for breakfast. While we don’t all have a friendly ghost who will cook us up some morning flapjacks, we do have this recipe for fluffy Halloween Ghost Pancakes. I’d call that a win (ghosts can get clingy anyway). Get the recipe from The Novice Chef.

Marnie and Grandma Aggie may save Halloweentown, but how about when Sophie magically makes those cookies fly over to her? She’s the real hero of the story. Get the recipe from Modern Honey.

The Evers family would have been toast without Madame Leota in her crystal ball. But, with two-layers of frozen, boozy goodness — you definitely don’t need a fortune teller to see where the night is headed. Get the recipe from Thrillist.

For a timeless movie the whole family loves, you need a treat the whole family can enjoy. This creative Halloween twist on the classic childhood cookie is something that will appeal to any generation. Get the recipe from Life. Family. Joy.

Clowns may be ruined forever, but carnival food shouldn’t be. Pennywise is gone, right? We have nothing to worry about, right? Get the childhood gang together and enjoy this treat with friends, just in case. Get the recipe from A Beautiful Mess.

One, Two, Freddy’s Coming for You… Don’t fall asleep! Better get to making these espresso martinis. Get the recipe from The Spruce Eats.

“The Exorcist” has long been considered one of the scariest horror flicks of all time, and was the first horror film to be nominated for a Best Picture Oscar. The best part is, now you can re-create one of the most famous scenes in your own home this Halloween! Get the recipe from Somewhat Simple.

“The Addams Family” (1991) — Halloween Meat and Cheese Board

I’d like to think Morticia Addams and her impeccable, refined taste for all things undead would appreciate this Halloween-themed charcuterie board. If not, well, everyone loves a good charcuterie board anyway. Get the recipe from Sugar and Charm.

So, do you remember that tree from the Conjuring movie…? Get the recipe from This Gal Cooks.

Pass the popcorn — with 10 films in the franchise, you’re going to need it. Scream Queen Jamie Lee Curtis made her film debut playing Laurie Strode in the inaugural “Halloween” film, and has been gracing our screens ever since. 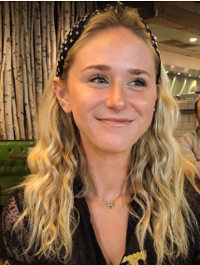 Madison Muller is a senior at Northwestern’s Medill School of Journalism, learning to navigate the contemporary media environment with compassion and candor. She enjoys writing about health, travel, and humanity. You can always find her with a coffee in hand. Madison is a proud supporter of the National Eating Disorders Association. Day of the Dead 2019 in Chicago: Where and Why You Should Join in the Festivities