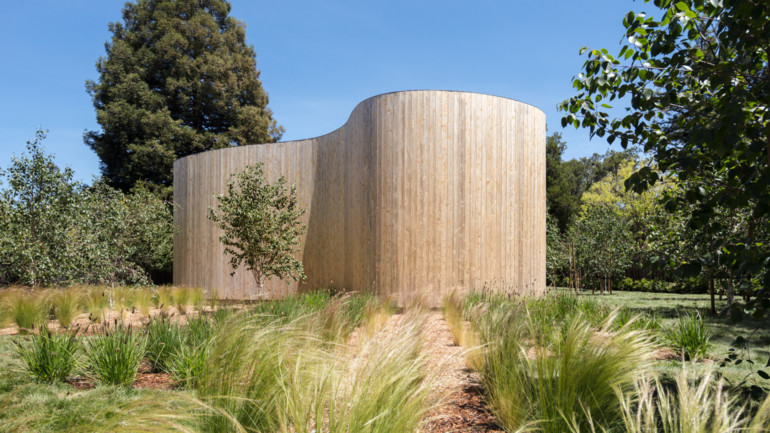 Steely, known for rule-breaking, forward-looking architecture — his own home in Hawaii is perched on nascent land near active lava fields — convinced his client, a single woman from Venezuela who is a computer hardware designer, that she could have utter privacy indoors and outdoors in a seemingly roofless house. He proposed an unorthodox amoeba-shaped 14.5-foot-high perimeter cedar wood wall that would both envelop and form her modern home and courtyard gardens.

By Atherton standards, the lot was long and small — just half an acre amid neighboring estates — and as far as views went, there were no arresting vistas to look at. “Just mismatched fences and the backs of neoclassical mansions,” Steely says. Controlling what she looked out at made sense and, in any case, to his mind, the best things about living in the Peninsula are its enjoyable temperate weather and magnificent mature trees.

“The surrounding tree canopy and sky are alive, constantly changing and breathtaking,” Steely says. “Focusing on this view ‘up’ rather than horizontally ‘out’ became our goal.”

His client took only a little convincing to sign on to the unusual design, and anyone who has ever lain on the grass, gazed up at a James Turrell-esque sky and watched birds and clouds go by can understand exactly why.

The windowless perimeter wall, which can be breached through a large square pivoted clear glass door — the town gate, as it were — encircles a couple of at-roofed, lofty living spaces, rectangular with glass walls. Their retractable Fleetwood doors open onto a pair of interior courtyards. Paved with travertine, these are planted with drought-tolerant river birch trees that create a sunlight-and-shadow interplay year-round, but their dappled shade is much needed in summer. The curved shape of the perimeter wall allows for a padded bench for taking o shoes before entering the bedroom wing. A view of the two ends of the long entry breezeway that links the public and private sections of the house.

At the west end, the master suite and a spare bedroom share a private courtyard in the crook of an L-shaped floor plan. A long breezeway, seamless travertine floors and the ever-present encircling cedar-clad wall help link the covered and open-to-sky spaces literally as well as visually.

Keeping “the finishes inside and outside the same makes all the spaces appear larger and seem like one,” Steely notes. Outside the walled compound on the east side, within a “meadow” of native grasses, a pavilion contains a modest two-car garage and a guest suite that doubles as the owner’s office. A fence is conspicuously absent. The structures and courtyards incorporate existing oak and redwood trees that were saved around the site; the trees serve to “root” the avant-garde buildings as well.

Despite Steely’s high-walled, inward-looking approach, his innovative single-story courtyard house is not at all at odds with its neighbors.

“This curved wood object looks sensuous and beautiful in this landscape,” the architect says. “A square box in its place would not have had the same effect. It would have added nothing new.” Zahid Sardar brings a range of design interests and keen knowledge of Bay Area design culture as the editor-in-chief of SPACES magazine. He is a San Francisco editor, curator and author specializing in global architecture, interiors, landscape and industrial design. His work has appeared in The New York Times and numerous design publications as well as the San Francisco Chronicle for which he served as an influential design editor for 22 years. Sardar serves on the San Francisco Decorator Showcase design advisory board.