9 of the Best Recent Books in Translation

American culture has always found popularity abroad. Our pop stars, movies, and books are easy exports, heartily consumed across the globe. However, foreign works have a harder time getting a foothold here in the States (unless you’re “Harry Potter”). In today’s global economy — to say nothing of the current political climate — it’s important to remember that not all great writers speak English. Here’s a sample of some recently translated works that are worth a read.

My First Two Hundred Years: From Budapest to Hollywood to Buchenwald and Beyond, a Beautiful Life Pál Királyhegyi lived an incredible life. First, the young Hungarian Jew sneaks aboard a ship bound for America in 1920. Then, he makes his way to Hollywood and becomes a respected film writer under the name Paul King. An unfortunate decision has extreme consequences when he decides to return to Hungary just as Hitler is gaining power. He is deported to a concentration camp, but he manages to survive until the liberation by American troops. He finally gets to Budapest just in time for Soviet occupation. In this, his memoir, he relates how he went from poverty to Silver Screen to near-extermination, then back home only to be forced into a Communist regime. The and elegant translation preserves Királyhegyi’s unique humor as he recounts his ordeal.

Chronicle of the Murdered House First published in 1959, “Chronicle of the Murdered House” was not translated from Portuguese until 2016 — and this edition went on to win Best Translated Book of 2017. Set in Brazil, the story is told through multiple narrative devices, including excerpts of letters and memoirs. The Meneses family is part of the old-money Brazilian elite, but when one of the sons, Valdo, marries Nina, an outsider, the family begins to fall apart and they mostly blame this wild interloper. The secrets each character slowly reveals make this book a riveting read. The friendship between Elena and Lila, two girls who grew up together in the poorest area of Naples, Italy, is complicated to say the least. Across the four novels that make up this series, Ferrante creates a vivid, realistic portrayal of women, friendship, Neapolitan culture, and socioeconomic conflict. It’s hard not to be completely engrossed by the twists and turns young Elena and Lila’s lives take, as they grow into adults faced with love and betrayal, career choices, and motherhood. What makes this series even more interesting is that Elena Ferrante is a pseudonym used by the author so she can remain anonymous. Her books have sold 5.5 million copies across 50 countries, yet no one knows who the writer actually is. Originally titled “Chanson Douce” (“Lullaby”), this book was an instant success in France. Slimani became the first Moroccan-French woman to win France’s highest literary award, the Prix Goncourt. Inspired by the 2012 stabbing of two young children by their nanny in New York’s Upper West Side, Slimani’s spare prose provides an unemotional but unsettling account of affluent Parisian parents struggling to maintain work-life balance. Perfect at first, things slowly unravel until, well, as the first sentence of the book declares: the baby is dead. (Warning: do not read this if you have small children at home!)

Beauty Is a Wound 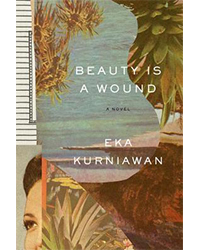 Anointed as today’s most original and imaginative Indonesian writer, Kurniawan uses elegant magical realism to engage with the disturbing landscape of his nation’s violent past. Featuring Dewi Ayu, an Indonesian prostitute whose family faces endless hardship, “Beauty Is a Wound” is an epic and compelling story, inspired by colonialism and independence, and steeped in both Javanese and Western narrative traditions. Think “A Hundred Years of Solitude” in Jakarta. But be forewarned: this book is pretty violent. Originally written in the 1940s, “Graveyard Clay” is considered one of the greatest Irish novels of the 20th century. The book is entirely made up of conversations among the dead in a small-town Irish graveyard: the newly dead bring news and gossip; the long-dead kvetch and otherwise complain. Vulgarity and humor abound, although if you want an even bawdier translation, try Alan Titley’s version in “The Dirty Dust.” From Egypt, “The Queue” is a timely novel about political oppression and totalitarian authority (Aziz clearly didn’t have to look far for inspiration). The latest uprising has failed and a regime called The Gate is in power. Its main method of imposing influence and suffering is by forcing all citizens to stand in an endless line (also known, of course, as a queue). In this line we meet a diverse cast of characters, including Yehia, who was shot during the uprising and is waiting to receive permission to be operated on. Will the people queued up around Yehia help him, or let him deteriorate out of fear of retaliation?

Eve Out of Her Ruins Mauritius is a small island in the Indian Ocean with a huge personality and a shocking dichotomy. Tourists flock from Europe and Asia to experience five-star, thousand-dollar-per-night accommodations, but if any of them thought to venture inland (it doesn’t take long; the whole country is only 28 miles wide) they would see poverty, classism, and segregation. Devi, one of the most celebrated Mauritian authors, describes the struggle of four teenagers: Eve, Saadiq, Savita, and Clelio, all of whom use a different escape mechanism from their lives in the projects of the capital city, Port-Louis. Devi writes teenagers (their impatience, their energy, and their lust with no outlet) impeccably, and she writes Mauritius from the eye of someone who knows that just behind the luxury hotels are people who are struggling to make ends meet. Banana Yoshimoto is known in Japan for being a prolific writer of novels that tackle death in one form or another. That she can remain popular after averaging a book a year since 1988, most of which follow a similar formula, is evidence that she writes convincingly about loss. In “Moshi Moshi,” Yoshie’s father dies in a murder-suicide at the hands of his mistress. Yoshie struggles with her own grief and anger while trying to help her bereaved mother cope with the adultery. A vivid portrait of Tokyo neighborhoods and pop culture contextualize the book and adds interest to foreign readers. Whether or not you are familiar with Japan’s capital, the narrative will transport you to contemporary Tokyo and its vibrant culture.

Ready to pick up your next read? Support local bookstores like Book Bin Northbrook, Bookends & Beginnings in Evanston, Lake Forest Book Store, The Book Stall in Winnetka, or Women & Children First in Chicago.