Former Chicago Bear Charles Tillman Opens Up About His Passion for Supporting Critically Ill Children, the Military and Law Enforcement

Charles “Peanut” Tillman is a legend in Chicago for taking the Bears to the Super Bowl and making plays with his famed “Peanut Punch.” In 13 NFL seasons, he has been to two Pro Bowls and two Super Bowls, however, he says winning the Walter Payton Man of the Year Award is his favorite NFL memory. Tillman won the award in 2013 for his incredible work with chronically ill children through his Cornerstone Foundation. Through the foundation, Tillman is able to help and inspire thousands of families who desperately need it.

Tillman started the foundation after his five-month-old daughter Tiana required a heart transplant. Since then, he has been passionately dedicated to helping critically ill children and their families through various philanthropic efforts, including Charles’ Locker, a program that enriches the lives of thousands of such families with games and electronics that help pass time during recovery and treatment. 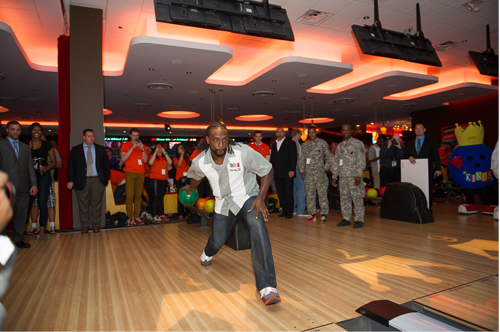 Make It Better had to opportunity to talk to Tillman about his foundation and the causes he’s passionate about. Tillman’s fervor and genuine commitment are inspirational. He truly is a humble servant who strives “to use [his] strength for service, not status.” In the wake of the atrocities that have been committed recently across our nation, Tillman and his tireless work to make the world a better place inspire us to do what we can, where we can, to help.

Make It Better: How do your abilities on the football field transfer to the bowling alley?

Charles Tillman: Oh, I don’t think they transfer at all. I’m pretty good at football; I’m pretty terrible at bowling. I’m not a good bowler. I can get you triple digits, you know, maybe 120 if I’m having a good day, but yeah my football ability and athleticism — tackling, interception and things like that — they don’t transfer over to bowling at all.

At your event you’re going to be joined by Jarrett Payton. How has the Payton family has influenced your charitable work?

I met the Payton family in 2011 when I was up for the [Walter Payton Man of the Year] award for the first time. I knew of the Payton family, but I didn’t really know what they have done, especially Jarrett. Since winning the award, Jarett and I have been able to partner up, doing different things. His foundation and my foundation have done a 5k together. He comes to my events, I try to go to his events and support him as well. With me winning the man of the year award, I’ve gained friends through them. A new set of friends with the entire family and it’s not just Jarrett it’s Brittney and Connie as well. I’m thankful for that. They are great people and I love what they do. They live and die Chicago. Born and bred. From the heart.

What was it like to bring the Walter Payton Man of the Year award home to Chicago in 2013?

It was good. It was probably one of the best, if not my best NFL moment in all 13 years. I say that because I’ve been on a lot of great teams. I have a lot of amazing memories. I’ve been to two Super Bowls, I lost them, but I’ve been to two. And with all the success that I’ve had on the field and off the field, that award probably meant the most to me. I mean, I put it up there right next to marriage, and the birth of my kids. And it was how I got it, you know, Radio City Music Hall, a standing ovation, the commissioner and then the speech that I gave … I wanted it to be really heartfelt. It meant so much to me because we were able to take our negative situation — you know my daughter getting a heart transplant. We were able to take our struggle and we capitalized on that and we turned it around and we tried to bless other people, because a stranger blessed my life with her decision to donate her son’s organs. And my daughter was a recipient of his heart.

We took a negative situation, a bad situation, a tough situation and we turned around and we tried to make the best of it. We’ve been able to meet and help a lot of families and I’m very proud of that. It was a proud moment for not just me, but my foundation, my board members, the people who are affiliated with the Cornerstone Foundation. It really shows that all the work that we did paid off and it continues to pay off.

What is it like to meet these families and to spread your positivity and your joy when they are in such a time of need?

It feels good. They want to hear about what we went through with our daughter. They want to hear a success story. [My daughter] Tiana has been very successful with her recovery and we’re eight years post-transplant and she is doing amazing. She’s extremely healthy and I want to share that. I want them to see that there is light at the end of the tunnel. This can be your child. You know, it’s tough in the beginning, but tough doesn’t mean dead. Your child is living. They can live with taking all these meds, it gets better over time … I try to convey that to these families and these parents. They’re looking for positivity and success and I want to say I’m that success story. This can be your child. Just stick with the plan, stick with the process, keep praying. It will be okay.

How has your family’s military background and playing on two different teams influenced your charitable work?

Well I think from a military standpoint when you’re serving, you’re serving and protecting the American people. Playing football … I’m trying to serve my teammates, I’m trying to do my job … In life, with our foundation, I’m trying to serve. I had a complete stranger serve me with her decision to donate her child’s organs. She made a choice, an important choice. That’s saved not just my child but a lot of children’s lives. She served us.

I love partnering with people who have the same vision that I have, but they just have a tougher time breaking into the foundation field because they don’t necessarily have that name, Charles Tillman or the Cornerstone Foundation. I love partnering with other foundations and other people and just talking to them and trying to get awareness to their foundations as well, because I think we all do amazing work.

Besides your great work with children and your incredible work with veterans, what other causes are you really passionate about?

Military. I’m deeply drawn to the military. My dad served, my uncle just retired a week ago after 30 years in the Army, my father-in-law served 30 years in the military, my mother-in-law’s a Marine. [I have a] deep deep passion for the military. I feel blessed to be able to live in this country because people are in Afghanistan and Iraq right now, away from their families trying to protect our freedom and keep this country safe. So I’m all about our military and supporting our men and women in uniform.  [I’m also interested in] helping police officers and law enforcement, I’m big into that. A lot of my friends are law enforcement officers and [I like to] support them as well. My three big passions [are supporting] law enforcement, the military and kids: chronically and critically ill children.

What drives you to be such a philanthropic person?

My role is to serve. I am a humble servant and I’m here to serve. I’ve had people serve me. I wouldn’t be where I am without the people that helped me get here. I didn’t do this by myself. I didn’t become Charles Tillman by myself. I can’t run my foundation by myself. I can’t do half the stuff by myself, you just think it’s me because I’m in the limelight but there’s so many people that help Charles Tillman out behind the scenes: my wife, my sister-in-law, my parents who did an amazing job of raising me, teaching me right from wrong. They served me, so now it’s my job and my responsibility to serve my kids, and serve my wife … That cycle, the love, the gift, the giving, you got to keep it going.

What is the best way for folks to get involved in the causes that you care about, and to help out your cause?

If you want to find out what we’re doing you can just go to CharlesTillman.org or you can hit me up on Twitter @PeanutTillman or on Instagram @PeanutTillman. But, more importantly, it’s really not all about my cause. What are you passionate about? If you’re passionate about helping out law enforcement, or helping out the elderly, helping out the sick, helping out kids in hospitals, helping out Toys for Tots … Whatever your mission or your passion is, get online. Research foundations in your area, in your community. Become a volunteer. Donate some time. Everyone’s not looking for you to donate $1,000 or $2,000. Your $5 helps. Your $10 helps. You give what you can give and really it’s not just about my charity at all. There are millions of charities out there … Volunteer, get involved.

Editor’s note: On July 18, 2016, Tillman released this video on YouTube announcing his retirement from the NFL and on July 22 he signed a ceremonial one-day contract to retire as a Chicago Bear.